Since retiring, my Grandad – Roy Arthur Sharp, has been writing his life story. It may have taken him 20 odd years to complete but he got there in the end!  He is always full of stories and with us all living busy lives remembering them will be difficult, that’s why documenting family history is important. It was a pleasure to turn his life story into a printed book, for him to hand out to our family so we can share and refer to those moments for years to come.

My Grandad’s life has certainly been eventful, with memories of the WWII doodle bugs, being evacuated to a farm in Wales, national service with REME (Royal Electrical and Mechanical Engineers), being a scout leader, retiring and living in Spain and traveling the world.

I’m going to share a few extracts from his book: 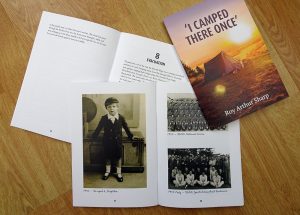 “Shortly after we moved in, my mother kept hearing a cat crying, very softly and difficult to establish exactly from where the cries were coming from. The cries could be heard mainly at night when all was still and quiet but she searched outside in cupboards and various places, but failed to find the cat. Some three weeks passed and one evening my Uncle Bill, who lived in Aylesford and also working at the papermill was babysitting for my parents. On arriving back home they found Uncle Bill in the kitchen with a very thin emaciated black and white cat, which he had found under the floor boards! It must have been trapped there by the builders before we moved in! However, it gradually recovered and became a family pet.”

“In early 1939 there was some concern that a war might start with Germany although I was too young to understand or worry about it, but I remember having to leave our school class rooms and stand in the playground pretending to put on gas masks!

When war was declared, mum said we would have to stay near the house. On the second day, a plane flew over and shot at a German Plane, the empty cannon shells came rattling down in our garden and we all ran indoors and got under the table. Later people were coming around picking up the empty shell cases for souvenirs.

It was exciting during the war when the air raids were overhead and ‘Doodle Bugs’ flying over. At school we had to shelter in the brick air raid shelters. We took turns in looking out for flying bombs and if one was near if you were on spotting duty you would hit a hanging lump of iron with a wooden pole, making a noise to warn everybody to take shelter. The nearest Doodle Bomb fell across the road behind Teapot Lane, which was then a Pear Orchard, (no harm done). Towards the end of the war the Germans were sending over Rockets V2 you could not see or hear them except for the very loud explosion. The nearest one fell near the Kent Messenger Bridge on the A20 near Allington, in a nursey garden.

When the air raid sirens went, sometimes rather late as the German Planes were already overhead – dozens of them! The air raid warden Mr Bates complete with tin hat would run down Orchard Grove, blowing his whistle shouting take cover! When things were getting dangerous dad and next door dug an underground shelter in their garden. It had bunks where you could sleep. Later in the war we had a steel shelter in our front room – like a large table with a steel top and mesh sides – This saved many lives if the house collapsed and you were inside i.e. when things were bad I had a bed in the front room, mum, dad, Joy and baby Keith would sleep in the shelter (Keith in a drawer). If things got very bad I had to leave my bed and get in the shelter.

I saw several planes shot down, one at Preston Hall, a bomber in Aylesford and lots of machine gunning and aircraft fire. As a young boy I did not see the danger and found life exciting. One day one of our bombing planes was coming home badly shot up, and tried to land at West Malling Airport. Unfortunately, it dropped in a small orchard near West Malling Station (all crew were killed) for many years after the war you could see where the wall had been repaired where the plane hit it trying to land.

When London was heavily bombed you could go out at night and see the glow of London and the docks burning. We went to London one weekend for a wedding, on the way home at night to my Aunt Janes flat in Victoria on a bus. There was a very bad air raid, we had to get off and go into an underground shelter for 2 hours. We past the time by singing war time songs. Luckily, we all got home safely to Orchard Grove.

One day I stood at the top of the shelter and saw several of our planes firing on a low flying German Bomber it crashed in a farm at the top of the hill going out of Aylesford. I went to the crash site and saw the wreckage all the crew were killed and later buried at Aylesford, part of the propeller was used to mark the grave.

Brighton was being bombed by hit and run fighter bombers, one bomb fell on a cinema killing many children. Two of my cousins, girls were in the cinema, one died of her injuries later in hospital.

My Aunt and Uncle came from Brighton with my cousin Brian to stay one weekend. They were walking in the nearby fields and I was collecting rabbit food with Brian, nearby a Doodle Bug flew over and was shot at by a spitfire, also a light anti aircraft gun shot at it. We were by then in Bell Lane, Ditton, Brian said what shall we do, as the Doodle Bug Engines had stopped and we knew it would crash nearby. We laid on the ground and then saw it gliding away, we watched it tip up and explode. It fell on a doctor in Snodland, killing several people.
My Aunt and Uncle were so frightened and said Kent was dangerous and hurried back to Brighton.

A cannon shell hit the gate of Mr Atkins house in Orchard Grove and one of our shells hit another house. I went with John Prebble as the people were out when the house was hit. The shell had gone through the kitchen door into the front room through a table and was sticking up in the floor, luckily it did not explode! So, we left the house for the bomb squad to remove it safely.”

“Towards the end of the war, the Doodle Bugs were coming over thick and fast, we were bringing many down by barrage balloon, shooting and spitfires tipping their wings under the Doodle Bug wings. Hundreds were brought down over Kent which exploded on hitting the ground. The authorities decided to evacuate children to Wales where it was much safer.

We were all assembled at Aylesford Station one morning, complete with sandwiches, gas mask and a label round our necks saying who we were. We left on a steam train to tearful goodbyes not sure where we would end up. Late that evening we arrived in Aberystwyth in Mid Wales and spent the night sleeping on the floor in a school hall.

The next morning, we were split into groups and taken to different small villages in the area. They kept brothers and sisters together. We ended up in a school 8 miles from Aberystwyth in a village called New Cross, other place names around we could not pronounce. Farmers and villagers came and selected us, a bit like a cattle market! He Looks big and strong, he’ll do!!

I went on a farm with Mr & Mrs Evans, they were kind nice people with a maid (Nelly) and a car. The farm ‘Glas Dir’ had cows, pigs, turkeys, geese, chickens and horses, also a wooded area with a stream running through it. Joy was placed with Amy Stamford up the road from me ½ mile on another farm owned by a Victorian couple who had a horse and trap. They were okay, but not as nice as my farmer. This was towards the end of the school holidays, I helped on the farm getting the cows in for milking and learning how to milk by hand.

We went to the local Sunday School and in the evening (Sunday) I could attend a nearby church service with Mr & Mrs Evans in the car. I helped with harvesting and potato picking. We had 3 dogs, Fly, Peril and Sam. It was a nice farm house with a farm kitchen, which we used every day except for Sunday Lunch and Tea which was held in the nice dining room. I cannot remember using the lounge, the people spoke Welsh but English when I was there. I learned a little Welsh and could count up to 10 – Un, Dau, Tri, Pedwar, Pump and perhaps a few swear words!

I had to draw a doodle bug as they had never seen one. The only action happened when a mine hit Aberystwyth and a parachute came down nearby.

I enjoyed my life as a farm boy and also receiving parcels from home containing comics – The Beano, Dandy and sweets.” 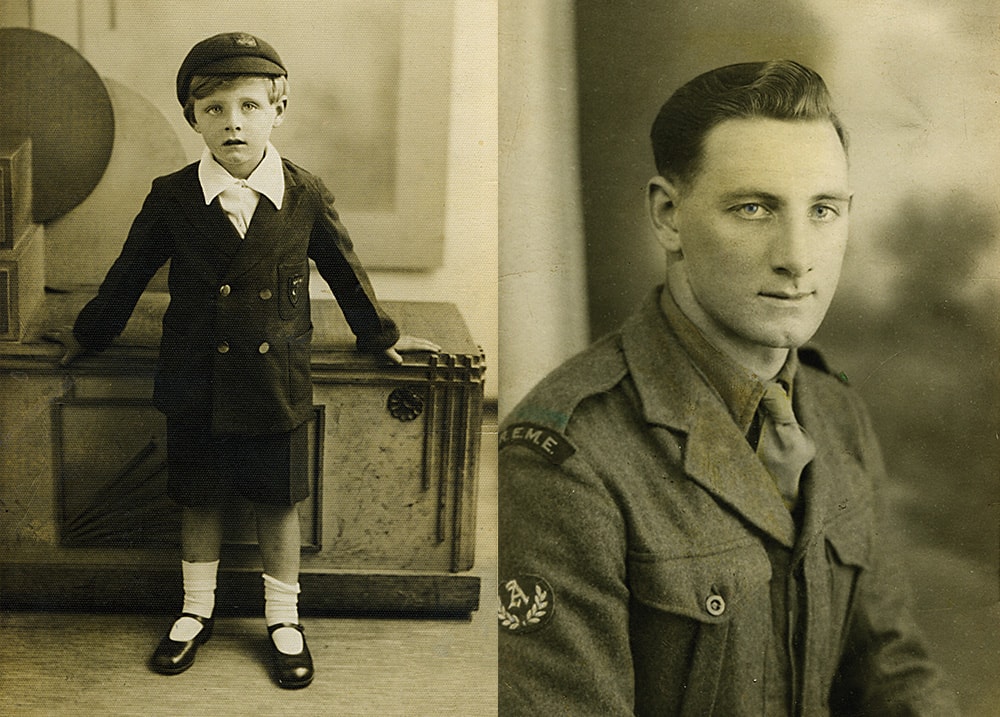 The back of the book included a series of old photographs, which I scanned and restored. My photo restoration skills came in handy!

I hope you enjoyed the extracts from his life story. It’s important to document those moments of your family history, save them before it’s too late.

Comment below if you have any fascinating war time stories.

One thought on “Documenting Family History – My Grandad’s Life Story”